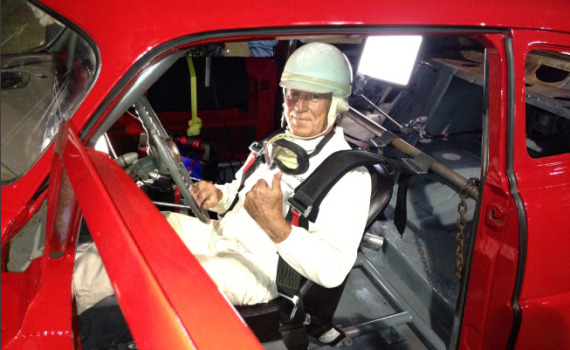 Our team is extremely proud to have helped in the restoration of Mario Andretti’s first love of racing, the Hudson.

On December 3, 2013, the world came together for the first ever, live social rebuild of a race car. All in effort to reunite Mario Andretti, a famous and successful world champion racing driver, with his first love and recreate the Hudson in GT6.

The Hudson is what Mario and his twin brother Aldo began to modify with funds that they earned in their uncle’s garage in 1959. They took turns racing the old Hudson on oval dirt tracks near Nazareth, where they were living at the time. Both brothers had two wins each after their first four races, of course, without their parents consent.

Aldo was seriously hurt near the end of the season, and their parents were unhappy to find out that the twins were racing. However that did not stop Mario Andretti from having 21 modified stockcar wins in 46 races in 1960 and 1961.

Working closely with the Sony PlayStation team, fans were able to view updates and behind the scenes videos during the entire build each day, for all five days.

We were excited when PlayStation integrated this recreation to be featured in PlayStation’s new video game, Gran Turismo 6 (Release Date: December 6, 2013).

Every small detail in the interior and exterior of this recreation was captured and photographed in every possible angle. You can drive this exclusive car through one of the game’s updates, available as of December 19, 2013.

To get inside this amazing story in full detail, watch all three video chapters (“First Love,” “Live Build,” and “Reunion”) of this short film, and see what Mario Andretti thinks when we unveil the recreation of his first love of racing. Plus, you can get some exclusive insight from our very own CEO, Billy Hammon.