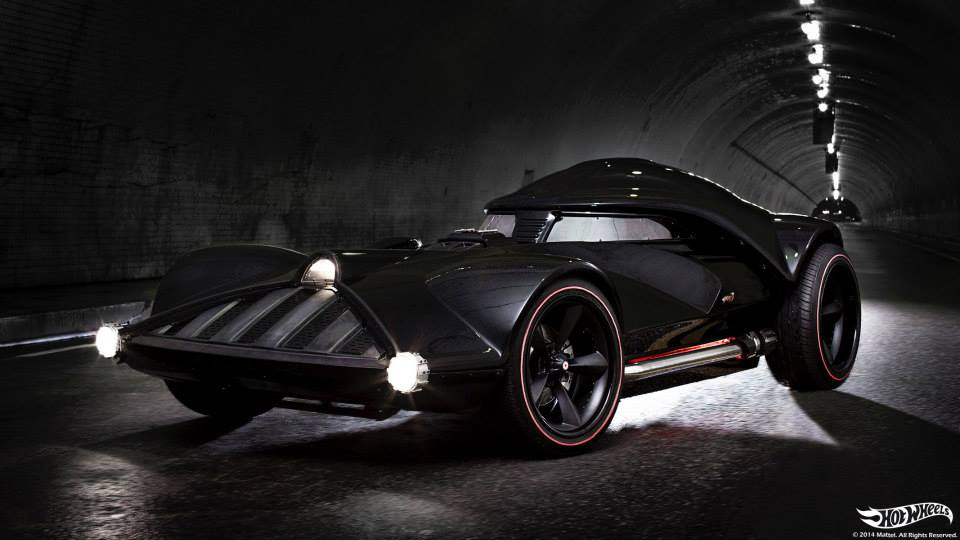 Action Vehicle Engineering and Hot Wheels invite you to come over to the dark side for Comic Con San Diego 2014. With Mattel finally partnering with Lucasfilm and Disney, they have created concept toy cars based on the popular characters of Star Wars. However, they still wanted to bring one of these concept cars to life, and Darth Vader is the chosen one.

One would imagine the cool villain as a very menacing hotrod. With a Chevrolet Corvette chassis, this sleek car can go up to the speed of 150 mph. It uses a tuned LS3 V8 to send 526 horsepower to the rear wheels and has a backlit, side-exit exhaust system. The horsepower is strong with this one!

As fans of Star Wars, we wanted to put in as much detail as possible. Of course, this entire build would not feel complete without the sound of Vader’s famous breathing and the sound of light sabers. It comes with its own lightsaber side pipes, just in case the Sith Lord might need it, and it lights up red!

The helmet itself raises up and down, but only when Darth Vader uses the force, and the custom seats are made out of fabric that looks similar to what Vader wears. The hood of the car features the Sith Lord’s chestplate, and the red trimmed wheels really made it all feel complete. You will also find the Galactic Empire logo on the rims, the wheel, and even sewn into the leather seats. Did you happen to notice the front grill? Yes, those are all engraved outlines of the Hot Wheels logo.

Not going to lie, a lot of hours were put into this custom one of a kind build, and every minute was worth it. With as much fun as we had making this build, we sure hope that all the fans at the 2014 San Diego Comic Con will be just as enthusiastic. If you are one of the many who unfortunately won’t be attending this year’s Comic Con, I hear that it will still be making appearances for the fans in the future.

Special thanks to Hot Wheels for the current photos and videos of the reveal. Be sure to follow us on Facebook and Instagram (@ActionVehicleEng) for more current news and events.