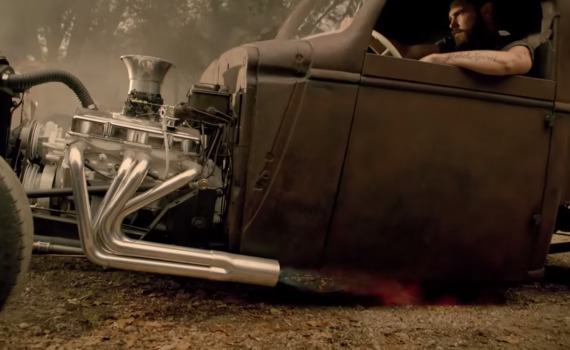 This project was both fun and exciting! To showcase their new drink, DEWshine, Mountain Dew created this commercial inspired by their roots in the backwoods of Tennessee, featuring our custom Rat Rod. Please enjoy the video below. 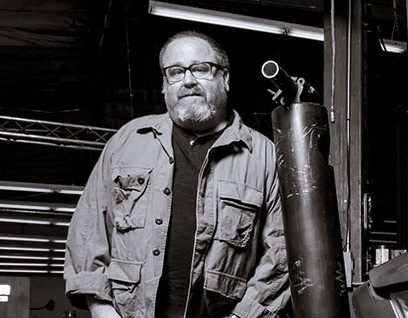 CarsYeah is a 5 day a week show hosted by Mark Greene, an incurable automotive enthusiast who interviews successful automotive entrepreneurs who live a lifestyle around their passion for automobiles. This time around, he takes us on a journey with our very own Billy Hammon, to get “under the hood” and provide some inspiration to all automotive enthusiasts.

Mark Greene covers more than just the basics, and also leaves us an interesting list of facts, advice and quotes to be motivated by. Listen to the full interview here.

SUCCESS QUOTE
“When you’re doing a job, you’ve already got that job. Now you’re working for the next job.”

CAREER CHALLENGE
For many of the builds Billy does, he puts the driver’s life on the line so he has to spend an enormous amount of time considering how not to fail. The fear of failure is huge.

BEST AUTOMOTIVE ADVICE
Be original and do it the way you feel it should be done.

PARTING ADVICE
Follow your dreams, be passionate about what you do, and don’t give up. 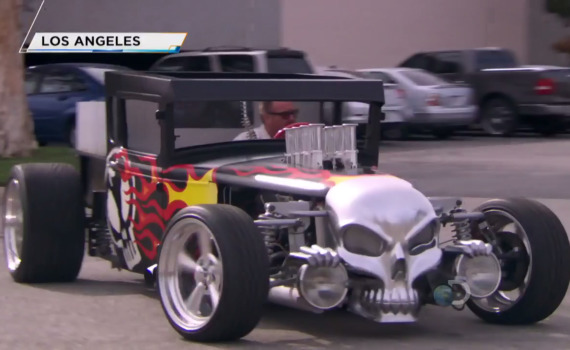 Discovery Channel’s “Daily Planet,” a daily science magazine show that delivers a fascinating mix of documentaries and features, with hosts Ziya Tong and Dan Riskin, featured Action Vehicle Engineering during their “Supersize” week, since we get to “supersize” small Hot Wheels toy cars in real life!

Our segment is featured on their March 10th episode, which you can view here.

The crew at Action Vehicle Engineering was delighted to a part of this restoration project, one of the many services that we provide. This 1952 Chevrolet Pickup was completely restored from top to bottom, which could not be done without our professional fabrication work.

This project was done for Jeremy McGrath and his wife, Kim McGrath. Jeremy is well known to be a 7-time AMA Supercross Champion and a professional off-road truck racer. You can see the process of this restoration project below. 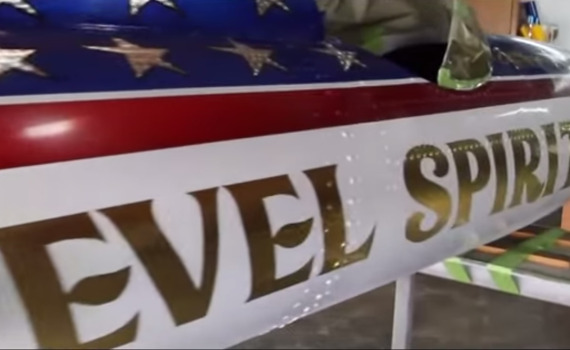 Action Vehicle Engineering is excited to be a part of the Return to Snake River, launching soon! Below is a trailer documentary provided by Weiward of this incredible story.

“Eddie Braun was born November 1961 in Southern California, where he was raised. Eddie began his career as a professional stuntman in 1979 after an inspirational meeting with his hero, Evel Knievel.

When Eddie was a young man in the 1970’s, he went to see Evel Knievel perform at the Ascot Raceway in Gardenia, California. After the event, Eddie personally met Knievel. The great daredevil put his arm around him and said,

‘Hey, listen kid, no matter what happens,
don’t let people say you can’t do anything.’

In over 30 years as a professional stunt coordinator, stuntman and performance driver, Eddie has appeared in over 1000 national commercials, motion pictures, television shows and music videos. Some of his film stunt credits include The Avengers, Sons of Anarchy, Two and a Half Men. Braun has worked alongside great actors and talent such as Jackie Chan, Charlie Sheen, Robert De Niro, and Madonna.

After a long and successful career inspired by Mr. Knievel, Eddie hopes to achieve the crowning highlight of his career by successfully coordinating and piloting the “Evel Spirit” rocket over the Snake River Canyon, thus fulfilling of the dream of his hero, Robert Craig “Evel” Knievel 40 years later.” 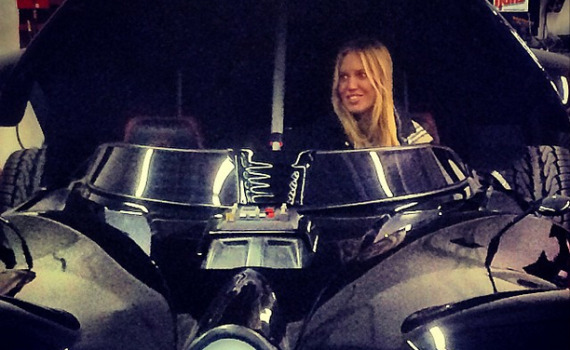 Special thanks to KCAL 9 / CBS 2 News for featuring us in a news segment on Friday, January 9th! You can watch the video below.

A local stunt-car garage is building life-size cars similar to Mattel’s Hot Wheels cars that inspired generations of would-be drivers.
Billy Hammon’s Action Vehicle Engineering in Chatsworth is contracted by Mattel, and many of the real-life Hot Wheels similar to the miniature models have broken world records.

“Who doesn’t love Hot Wheels? I mean, life-size Hot Wheels. Who wouldn’t love that?” Hammon said. “It’s an honor. We’ve been playing with Hot Wheels all of our lives, and now it’s a dream to build them for real-life size.”

Many of the cars have been used in movies and commercials. Those interested can even custom-order their own Hot Wheels model. 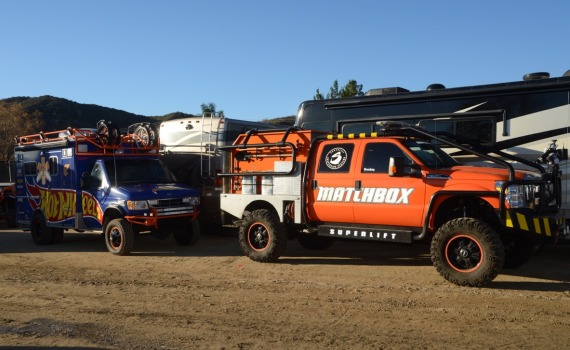 In 1998, Day in the Dirt started off as a one day event, and earned the nickname of “MX Woodstock”. It is a gathering of friends and family and their passion, dirt bikes. Hosted by Hollywood Stunt and Film at the Glen Helen Raceway, it is now a weekend event that attracts not only some of the fastest racers in the world and the most famous in the moto industry, but also riders in the Hollywood stunt community and moto fanatics from around the world.

Of course, some of the guys from Action Vehicle Engineering had to be there, including our very own CEO, Billy “Jetboat” Hammon. He received special thanks, but we would like to give special thanks for the opportunity and a great, fun weekend! 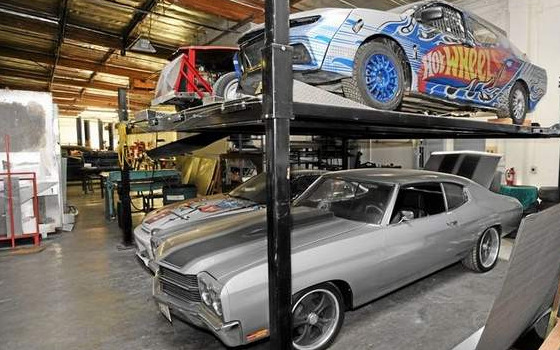 Action Vehicle Engineering would like to thank Jordan England-Nelson for the following article on the Daily News, and John McCoy, the Staff Photographer. To see the full article, please click here.

A race car that can withstand eight G-forces on a double-barrel loop. A dune buggy that can hit a ramp and launch into a 360-degree corkscrew flip. A Darth Vader roadster that breathes like the Star Wars super villain and tops out at 150 mph.

These are among the life-size Hot Wheels vehicles that have come out of Action Vehicle Engineering, a stunt car garage in Chatsworth.

Billy Hammon has seen business for character cars spike since he first teamed up with Mattel in 2011, when the El Segundo-based toy company commissioned a life-size Hot Wheels truck for a world-record long jump at the Indianapolis 500.

To date, Hammon has built 15 Hot Wheels vehicles. Other Star Wars cars likely will come out in advance of the Episode VII film, which hits theaters this fall, but Hammon couldn’t discuss those plans.

The character cars are used to create buzz at toy and car fairs. Mattel also works with Bandido Brothers, a Los Angeles production studio that films elaborate races and stunts for the “Hot Wheels For Real” video series.

Hammon builds the cars, but the design still comes from toy makers, who are more worried about aesthetics than functionality.

Hammon’s most recent project is a fast-looking car with plenty of fast-and-furious street racing accessories, such as a spoiler and fancy-looking mud flaps.

“All of this stuff here was done by Hot Wheels designers with pieces of cardboard,” Hammon said as he passed a 2007 Mustang that has been reborn as a Hot Wheels car. “It’s just what looks cool. That’s what these guys are going after.”

“Usually when we design a Hot Wheels car, we design it as if it were going to be built,” he said.

Several of the Hot Wheels designers come from careers as car designers at Honda and Toyota, which have U.S. headquarters in the South Bay.

In theory, all Hot Wheels cars are scaled 1:64. But when toy cars are used as models for real cars, tweaks have to be made, Hammon said. Otherwise, a car door might end up the size of bedroom door.

“You can’t just take this and scale it,” Hammon said, holding up the “Bone Shaker” Hot Wheels car that served as the model for the life-size version built in his garage. “Everything on this car had to be hand-made.”

Hammon has a background in go-kart and motocross racing, but said his forte is “behind the wrench” rather than the wheel.

His core business is producing stunt cars for commercials and films. He’s shot about 1,000 commercials for brands such as BMW, Mercedes-Benz, Disney, Taco Bell and Six Flags.

Most shoots don’t involve exploding cars or high-speed chases, but it’s important to have a car expert like Hammon on set in case a door or window needs to be taken off to get the right shot.

Hammon’s most challenging project was building a Hot Wheels car that could withstand the stress of an inverted loop.

The car was tested at the El Toro Field in Orange County and broadcast live at the 2012 X Games in Los Angeles.

The challenge was creating a suspension system that could withstand the centrifugal force of a car going into and out of a fully inverted loop. He also had to minimize the distance between the front wheels and the front end of the car so that it wouldn’t drag as the car moved up the curved ramp.

Initial tests were done with a remote controlled, unmanned version of the car, which flipped off the tracks at least once.

For Hammon, the stakes were high, because the two stunt drivers, Tanner Foust and Greg Tracy, are longtime friends.

“There’s nothing I could have done if that car fell out of the loop,” Hammon said. “Putting my best friends in the cars that I built … that’s the hardest part for me.” 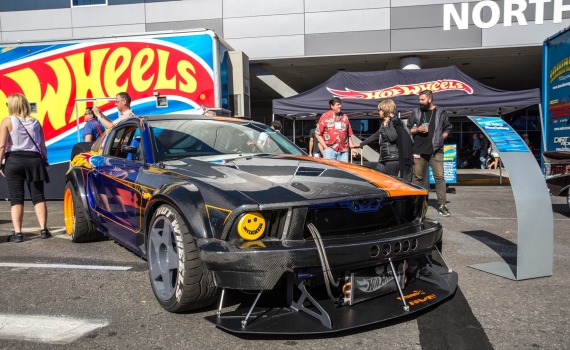 For SEMA 2014, Action Vehicle Engineering worked with Hot Wheels on this Mustang project. The wheels were made special for Hot Wheels, and the whole vehicle was meant to be envisioned as a Japanese style race car. It also has a special wrap design, with decals giving special thanks to Sparco, Falken Tires, KW, Fifteen 52 and Clarke Designs. 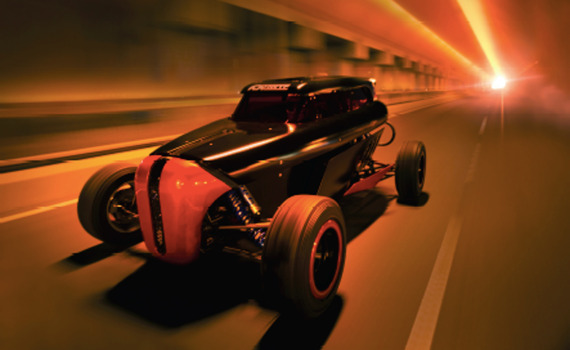 Think this Hot Wheels Red Ripper has what it takes to win the World’s Best Driver? Presented by Hot Wheels, this Red Ripper is a part of Team Red, of course, who are known for being outrageous! This mini movie is entertaining for all ages, probably because Greg Tracy coordinated the jumps and stunts, including those over snow, desert, rock and wooden terrain.

In this competition, all the contestants must race through all seven Hot Wheels Test Facility zones. Do you think the custom single seat ripper has what it takes to win? Created by Billy Hammon’s team partnered with Bandito Brothers, we think it will! To find out more, you can watch the short 22 minute mini movie below.