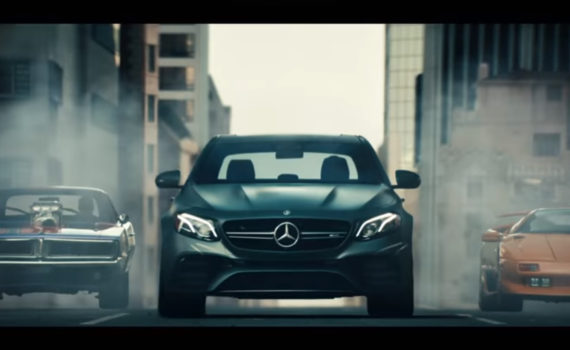 The Fastest E-Class Ever

Mercedes-Benz has introduced the newest and fastest E-Class ever, the 2018 Mercedes-AMG E63 S Sedan, featured in their latest commercial, “Off the Line”.

Action Vehicle Engineering was pleased to search and source all of these fast rides! From vehicle wrapping, to transportation and on set prep, the crew at AVE can bring it all together. 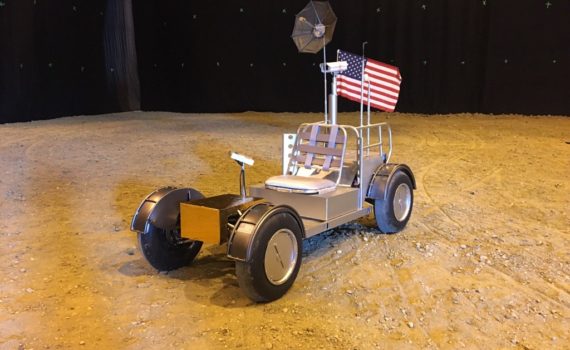 This was a sweet little project to be a part of. The team at Action Vehicle Engineering was tasked with a stellar mission, creating a moon buggy.

For an upcoming commercial, the team had a short time to fabricate this vehicle to life. Although we highly doubt it will work on the moon, it does come with its own satellite, video camera and tires made for the terrain. 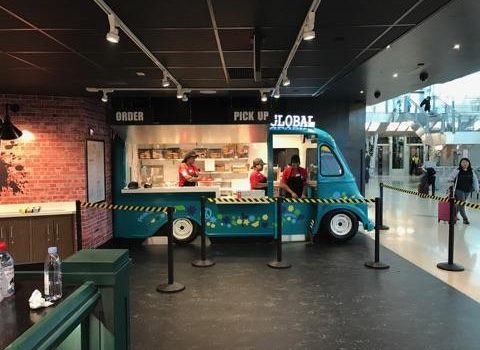 A new addition of restaurants have been added to the JFK International Airport food court, and Action Vehicle Engineering was glad to be a part of it.

This set of restaurants entail a more “on the go” friendly snacking for a busy airport with a few vehicles incorporated into the overall design. Similar to street or food trucks that one can find throughout the busy streets of New York, many travelers have a variety of food to choose from, depending which “truck” or section they go to.

The crew at Action Vehicle Engineering fabricated both the blue “Global Food” 1950’s Metro Van and the classic VW Bus as envisioned in the finalized concept design and planning stages of the project. All this was ensured to meet all the standard requirements for food, safety, paint, plumbing, electrical and airport regulations, as well as functionality in terms of a working food truck or restaurant. 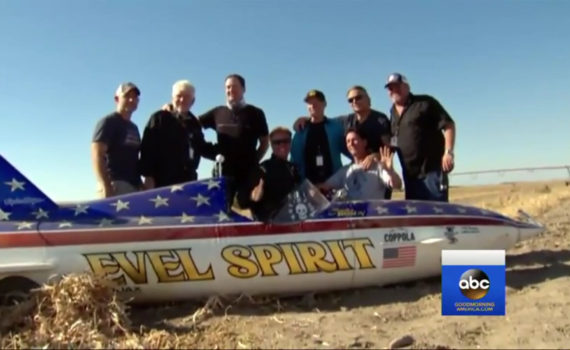 We would like to congratulate Eddie Braun, a 54-year old stunt man with a dream, on his much anticipated success jumping over Snake River Canyon! Billy Hammon and his crew at Action Vehicle Engineering were so pleased to have been a part of this special project.

This feat was originally attempted over 40 years ago by the iconic daredevil Evel Knievel. However, the famous jump was not successful. In an effort to prove that the Knievel would have completed the jump if his parachute did not go off early, Eddie Braun began his mission.

On September 16, 2016 Eddie soared through the sky at 400 mph over the canyon in a high-powered rocket named “Evel Spirit”.

During Evel’s original 1974 attempt, his parachute activated too early causing Evel to crash on live television. The event was the second most watched broadcast that year and brought in more ratings than the Super Bowl. Evel never performed after that. It ended his career.

Eddie joined forces with Kelly Kneivel, Evel’s son, and Scott Traux, son of Bob Truax, the original rocket design engineer to see history righted for their fathers and to fulfill a lifelong dream of Eddie’s. Bob worked on the original space shuttle and was one of NASA’s first engineers. However, despite a decorated career, he came to be widely known for the failure of Evel’s rocket.

In an effort to prove that Evel would have made it but for the parachute going off early, Eddie’s rocket, dubbed The Evel Spirit, was designed using Bob Truax’s original plans, with a few modifications for the parachute.

Today, Eddie literally soared through the sky at over 400MPH powered by steam, water and 1970’s technology which included an oxygen tank from a B50 bomber, dog food can lids, and a fuel tank from a Grumman Albatross.

“I feel like the no name third string quarterback of a junior varsity team that just won the Super Bowl,” says Braun. “My team got me there. I ran it into the end zone. We scored and won.” 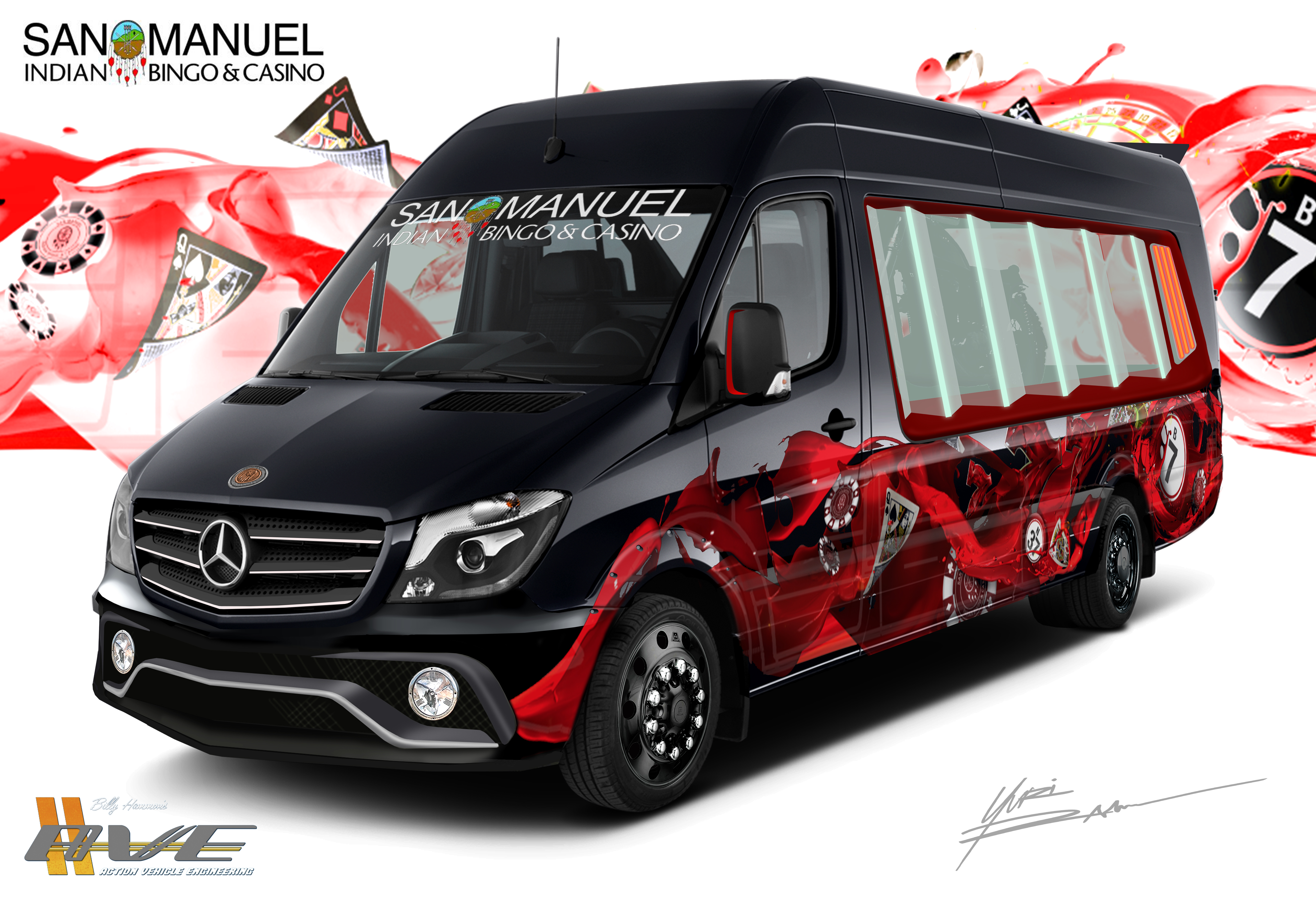 San Manuel’s Indian Bingo and Casino has become “All Thrill” this season. The crew at Action Vehicle Engineering created a thrilling ride to match.

The project wouldn’t seem complete without its’ full custom wrap and a nice set of custom wheels. Be sure to look out for this promotional vehicle at any San Manuel (@sanmanuelcasino) event this season. 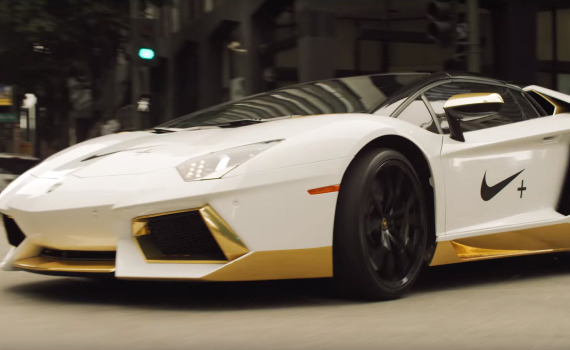 The crew at Action Vehicle Engineering was excited to be a part of Nike’s Speed Drops Project. They brought speed to the streets of San Francisco to celebrate their Nime+ members. Select members received exclusive product delivered by NFL athletes, including All-Pros Todd Gurley, Chris Ivory, and Latavius Murray.

For the fastest speed drop, Nike thought three Lamborghinis would do the trick. All were trim wrapped in gold to match the exclusive products for three lucky Nike+ members. Please enjoy the video of the project below. 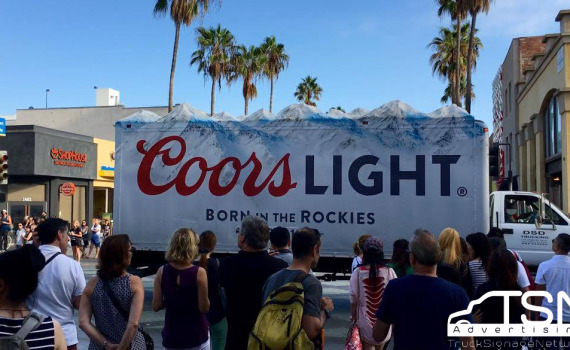 Action Vehicle Engineering was pleased to work together with Eric and TSN Advertising on this wonderful project. The AVE crew helped set up six trucks total in this Coors Light truck advertising campaign.

Three of the trucks were situated with the picturesque Rocky Mountains all across the top. The other three were fabricated to look like the actual frosty Coors Light aluminum can. Both custom jobs compliment the wraps provided by TSN Advertising.

To follow up on where these trucks make an appearance, you can always get updates here. 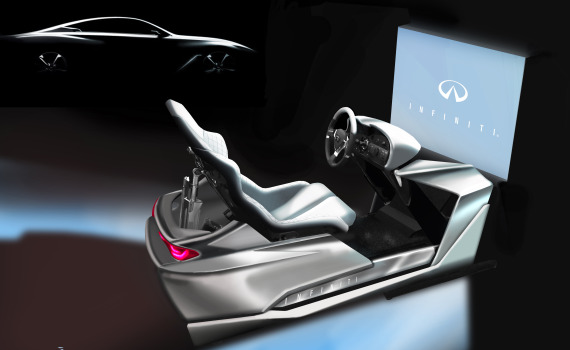 Complete with racing-style seatbelts, a white racing seat (with quilted inserts to remind you this is a luxury brand) and a real Infiniti steering wheel for added effect, this simulator lets you drive away on some of the most incredible roads around the world.

Created in a little over a seven and a half week period, the simulator tilts and can recreate G-forces as it takes you through roads including the Stelvio Pass in Italy and the Atlantic Ocean road in Norway. And not all of it is CGI; filming certain segments of these incredible roads was a requirement.

It is a must to try this virtual reality experience at an event, keeping in mind the beautiful views and the sounds of the real engine. 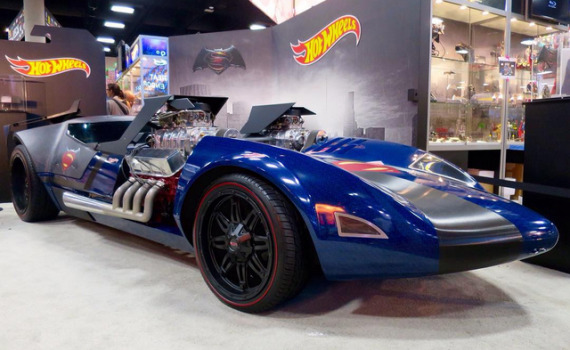 As a tribute of the upcoming movie, Batman v Superman: Dawn of Justice, the Action Vehicle Engineering crew teamed up with Hot Wheels to build this custom ride based on the Hot Wheels Twin Mill, one of the most famous and original Hot Wheels design of all time. The Dark Knight and the Man of Steel collide to create this one of a kind thrill ride.

The all-new custom-fabricated rear wing and engine covers suggest the shape of the Batman logo and reference the armor on the new film’s Batmobile. The Twin Mill’s graphics are derived from the texture and detail of the Batman and Superman costumes from the film, and the look of the two heroes is tied together with brushed steel striping from the hood back to the cockpit. All new wheels complete the car, giving it a tougher more aggressive look that matches the high-octane spirit of the new film.

Unveiled at the San Diego Comic Con in 2015, you can watch the behind the scenes below, courtesy of Hot Wheels. 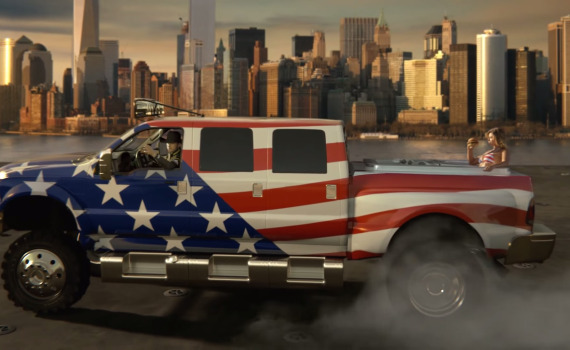 Why did Carl’s Jr. put a split hot dog and kettle cooked potato chips on a Thickburger? Because America, that’s why.

But to support the weight? Just simply fabricate two crew cab trucks together, and now you have a truck with 6 doors for more of your American friends. And to top it off, a full American flag wrap to complete the all American truck.